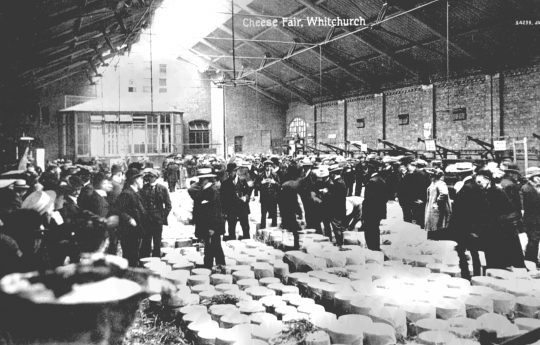 Whitchurch and the Story of Cheese…

We have recently found some amazing bits of history, here at Belton Farm. Whitchurch Cheese Fair was very popular and well attended. A ‘Whitchurch and the story of Cheese’ article was written on the history of Whitchurch and cheese fairs from years ago..

“Wednesday was the day for Whitchurch Cheese Fairs and these were held three weekly intervals and opened at 10:30am. The cheese were brought into the fair by lorry, motor car, farm float, even motorbike and sidecar, usually early in the morning. There would be tremendously long queues. Each lot was weighed on the council’s scales and a weight ticket issued. toll was charged according to weight. If plenty of space was available, the cheese would be nicely bedded on straw, brought in by the vendors, in single grouping. Occasionally the cheese were piled but not more than two high. No cheese were bored before the ringing of the bell which announced the opening of the fair at 10:30am.”

“Whitchurch was the largest fair of them all; others were held at Chester and Nantwich. It was instituted in 1899 but was discontinued during the First World War. In the years between 1920 and 1921 the average weight of cheese pitched there in the full year was 1300 tons. The biggest weight offered for sale on one day was a matter of 265 tons of Cheshire cheese at the 1922 Annual Dairy Show and Fair held in November. This represented a fine show of about ten thousand cheese.”

“It was frequently the arrangement for a buyer to take regularly all the cheese a maker would bring to the market at a price they agreed on the official quotation. Generally however it was a case of bargaining – a free for all. As an indication of sale the lot would be ‘strawed’, that is, a screwed handful of straw was cast upon the cheese as a sign for others to keep off. When trade was brisk the whole business of the fair would be satisfactorily concluded in half an hour.” (Above – ‘Strawed’ Cheese at the Cheese Fair Whitchurch 1902)

“Annual Dairy Shows were the highlight of the cheesemakers’ year. A great many special prizes and valuable cups were available for competition. At Whitchurch, shows were staged from 1900 to 1939, the only break being 1914 – 1918. The town would be crowded; hotels and inns filled to capacity and an almost carnival spirit prevailed. The shows were held in time of year when really fine cheese were on offer, satisfactory prices were assumed. Show cheese were displayed attractively in good quality white calico and the edges of the cheese were carefully trimmed and glistened with a touch of Vaseline. Competition was very keen. A win would mean a veritable hallmark for any dairy. The encouragement to compete at these events was undoubtedly a pride in the craft, pride of achievement and maybe a chance to go one up in the neighbours.”

“The information contained in this article is courtesy of the publication ‘Hooked on Cheese’ by F.W.Foulkes and the illustration can be found in the book ‘The Story of Cheesemaking in Britain’ published by Routledge and Kegan Paul and Loaned to us by Shropshire Country Museum Service.”